Another country down! We went to Madeira for a Sport Science conference from the 12-17th. Getting there was an adventure! Because we had been so busy with wedding planning in the previous months, we put off buying our plane tickets to Madeira and ended up flying late at night. Our first plane was also delayed quite a bit, causing us to miss our connecting flight in Lisbon, Portugal. Luckily, there was another flight out that night...we arrived after midnight and still had a long car ride to the hotel. 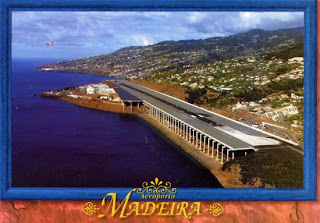 The airport in Madeira used to be considered one of the most dangerous runways in the world because it was only 1400 meters (0.8 miles) long, giving pilots very little time to land and no room for error. The runway is also built along a rocky cliff, and the landscape of the island causes very strong winds on the runway. After a terrible plane crash off the end of the runway in 1977, they decided to build an extension onto it. Today the runway is much safer and has a more normal length, but the wind made our landing still a little bit scary. We felt like we were landing sideways, but we touched down flat...I'm just glad it was dark outside. 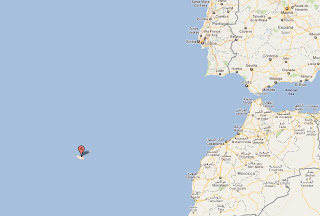 Madeira is an island that belongs to Portugal, but it's actually much closer to Africa than it is to Portugal. Because the island is so far out into the Atlantic, the water gets deep very fast and people can often see wales migrating. The terrain of the island was pretty amazing...it was formed by volcanoes, so it was so harsh, but really fertile at the same time. Everything was rocky and steep. The highways are just a series of tunnels and bridges because there's no flat land anywhere. It was neat to see the huge jagged rocks coming up out of the water just off the coast. 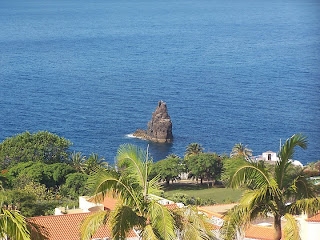 We stayed in the capital city of Funchal. Funchal means "fennel" in Portugese, which you can find growing on the island. 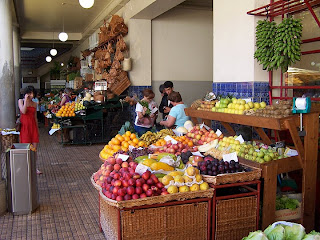 We had one day mostly to ourselves, so we went into the town center and saw the local farmer's market. They had a huge fish section, and rows and rows of every fruit you could imagine. They also sell a lot of handmade wicker things, flowers, and embroidery. 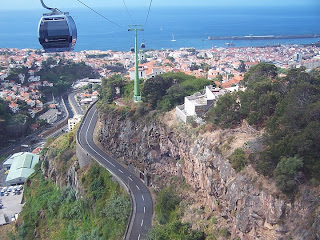 Later we took a cable car up the mountain to the city of Monte. From the cable car you get a great aerial view of Funchal, of the rocky coastline, and of the banana plantations. There were banana trees everywhere on the island, and because the terrain is so steep, all of the farmland is terraced. There is a surprising amount of farmland, too. Madeira used to be one of the major world suppliers of sugar. Today, I believe they are mostly producing fruit and vegetables. It's hard to imagine farming without any heavy equipment, and right on the edge of a cliff. 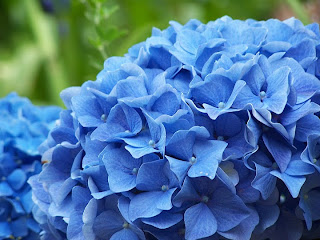 Monte was a quiet little town with flowers everywhere. We walked through a garden that was just overflowing with blue hydrangeas, lilies, flowering trees, everything you can think of. 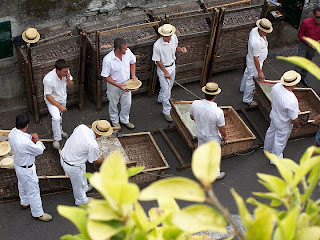 One of the most unique and famous things to do in Madeira is take the toboggan ride down the hill from Monte. This is the oldest method of transportation in Madeira. The toboggan is basically a wicker bench/sled that is driven and steered by two very authentic looking Madeiran men. It wasn't all that fast, but it was a lot of fun. At the bottom of the hill, taxi drivers line up to try to take you back to Funchal. When we got there, a bus came by that was going our way, but as we ran to get on it a taxi driver said "stop, it's going the wrong way", and we didn't get on. He then wanted to drive us to town. I'm now 100% positive that the bus was going the right way. We decided to walk away from the taxi drivers down to the next bus stop, but we ended up down a wrong road far from where we needed to be. Billy hailed down a taxi driving by, and wouldn't you know it, it was the same guy! I would have taken any taxi over his, but we made it back. 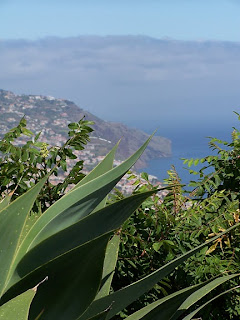 The other major experience of the trip was a guided bus tour sponsored by the conference. We were in huge buses going up very narrow mountain roads. At times you could see right over the edge. We had a tour guide that explained all about the history and culture of Madeira, and we saw some amazing views. It's really amazing how densely inhabited parts of the island are, given the terrain and the distance from the mainland. Almost everything you see, from cars to Cheetoes, had to be shipped in.

Overall, one of our favorite parts of Madeira was the food! Everything we ate was unique and delicious. Every place we went had the traditional bread, "bolo do caco". It's almost like a big english muffin with garlic butter. Of course, you can also get great seafood. Their specialty is fried black scabbard fish with a banana on top. We saw tons of that fish at the farmer's market...it's actually pretty terrifying! 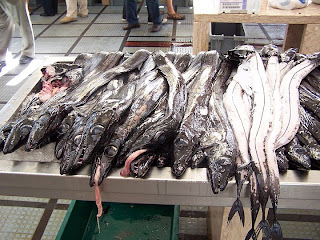 Madeira was an interesting place to visit. I think all it's missing is a sandy beach!