While in Munich, we saw our first concentration camp. It was the first camp that the Third Reich built- finished in 1933, less than 2 months after Hitler came to power. Dachau served as the model for all of the other camps.
The sign on the gate as you enter the camp reads "arbeit macht frei", which roughly means "work sets you free". Of course, this is irony...those who worked were kept to work as slaves, and those who didn't only died quicker than those who did. 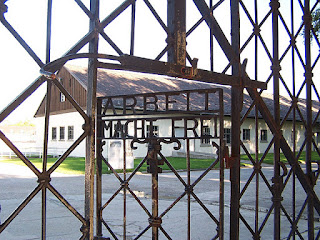 Most people think of Jews when they think about the prisoners of concentration camps. While Dachau held many Jews, noone was safe....in fact, it is estimated that about 1/3 of the prisoners were Jewish. Catholics were also arrested, along with political dissenters, scientists, and immigrants from France, Poland, Russia and Czechoslovakia. After a couple years, criminals from prisons throughout Germany were also housed in the camp.
All of the prisoners wore colored tags. The color of the tag indicated the prisoner's group- Jewish, Christian, Political dissident, Criminal, etc. The color coding was probably intended to maintain barriers between the prisoners, and to induce conflict between them to prevent unified uprisings. 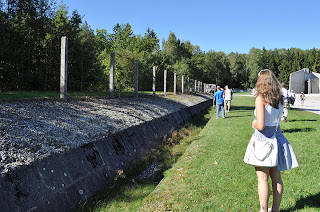 It was basically impossible to escape from the camp. The areas where prisoners were allowed to walk was paved with gravel, and the outside edge of the camp was covered with grass. If a prisoner set one foot on the grass, the guards could shoot them. When the prisoners were running to roll call in the morning, the guards would sometimes grab their hat and throw it onto the grass...the person then had the option of being beaten for not being in uniform, or taking their chances stepping onto the grass.
Beyond the grass was a water canal, followed by a barbed wire fence. There was no way out. 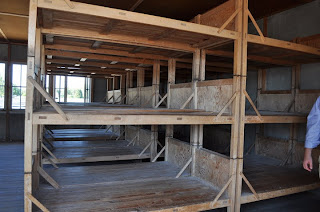 The living quarters in this camp started out somewhat humane. Each person had a bed with a shelf. However, as the camp became more and more crowded, the bunk beds became smaller, and were stacked higher, eventually ceasing to be beds at all and becoming large stacked platforms where hundreds of people would sleep together.

Although Dachau did have gas chambers and crematory ovens, they were finished shortly before liberation and it is thought that they were never used. We toured the gas chamber, which appears to be a large shower room. Prisoners would have been told they were entering the room to shower. Interestingly, the old German word for shower, "brausebad", was replaced with a new word after the war because of its association with the gas chambers. 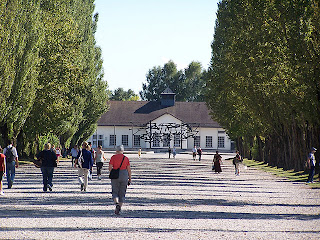 The Dachau camp was liberated in April of 1945. It is thought that over 200,000 prisoners had been housed in this camp, and 35,000 had died. Most died of malnutrition and disease. 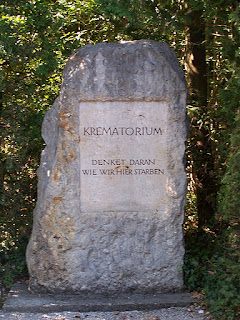 This stone says "remember that we died here". It's sad to visit sites like this, but important as well. We must never naiively believe that things can never get this bad...that the holocaust was a freak accident, or that Germany was to blame, and other countries would never allow such an atrocity. Germans have told us on a few occassions that when they won the World Cup a few years ago, it was the first time people were publicly proud of being German since before the war. 60 years later, people are finally starting to display their flags again, and feel the sense of patriotism and love for their country that we as Americans sometimes take for granted. Visiting a camp like this is a reminder that freedom should be cherished above all else. Sacrificing freedoms in the name of safety always seems to benefit some and imprison others.

To see the rest of our pictures from Dachau, click this link: