We're festival people. Whatever subject you can think of, there is a festival for it...and nobody has more festivals than Europeans. The Rhine in Flammen (Rhine in Flames) festival is actually a series of annual festivals along the famous Rhine River in Germany. The fun starts in the city of Cologne, and moves south down the river to St. Goar, with festivities every Saturday for about a month. 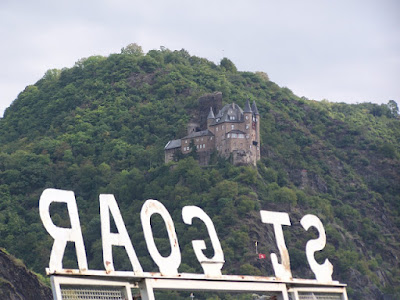 We chose to catch the festival on the last Saturday, in its ending city of St. Goar, a tiny little town which undoubtedly gets most of its tourism from this festival. 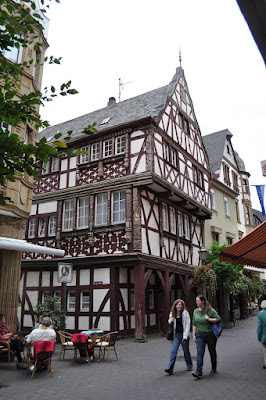 We stayed in the equally tiny nearby town of Boppard, which was like staying in a German postcard, with its crooked, half-timbered buildings and castle-topped river banks. 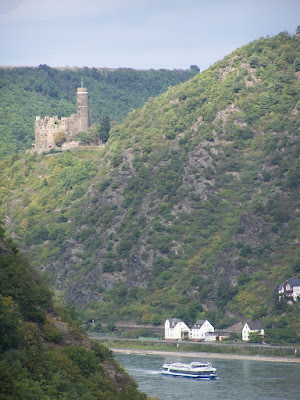 I may have mentioned this before, but the Rhine is a pretty historically and visually awesome river. In the 12th century, Germany was made up of hundreds of sovereign parts, all ruled by individual members of royalty. These wealthy families built castles all along the Rhine River, which was (and remains today) a very important trade route. These castles levied taxes on the ships, which had to be paid in order to gain passage further down the river. One castle is actually on a sandbar in the middle of the river; it would stretch chains across the river to keep ships from passing without paying. St. Goar is located right in the middle of the stretch of the Rhine which is the most densely populated with castles...over 30 of them in just over 30 miles (60km). You can imagine how big of a problem the tax situation became! Today, though, it's a beautiful compliment to Germany's landscape. 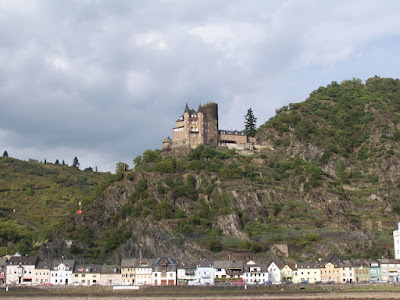 Throughout the day, you get a sense of playful competition building between the two sides of the river. Marching bands walk through town, and the whole town is transformed into a big party. The bands try to outdo each other on each side of the river. 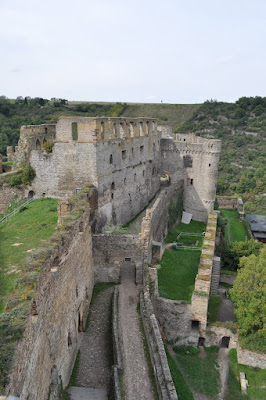 We managed to get in to see the castle on St. Goar's side before the festival started- Rhinefels castle. This landmark dates back to the 6th century, when a monk named Goar established a hospice here. In 1245, a fortress was built. Its worthiness as a stronghold was put to the test in 1255 when the townspeople of the Rhine formed an army and attacked because they were so sick of those darned taxes...but Rhinefels survived. The castle was much later blown to pieces by French revolutionary troops, and this area of the Rhine became French territory in 1801. The land was later given to the people of St. Goar, who rightfully own it today. 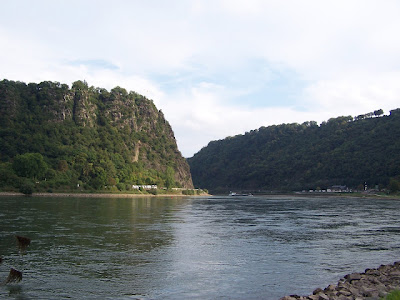 A short walk down the river takes you to Lorelei Rock, a 120 meter high rocky river bank, situated on the tip of a sharp bend in the river. This spot was made famous by German author Clemens Brentano in 1801, who tells the story of a beautiful woman with a broken heart, who sat atop the rock and enchanted sailors, who were distracted and led to their deaths in the tricky, dangerous river bend. 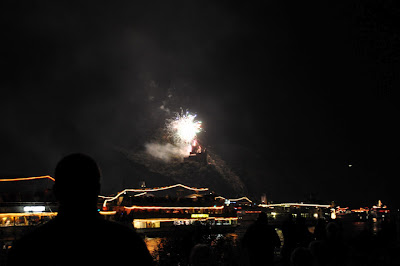 Essentially, the Rhine in Flames festival is a fabulous fireworks show, with a twist. Hundreds, if not thousands of tourist ferries crowd the river, all of them decorated with lights. Watching the boats is almost as beautiful as the fireworks. Fireworks are set off from barges intermingled with the boats, as well as from the two castles on opposing sides of the river, one on the St. Goar side, and the other on the St. Goarshausen side. 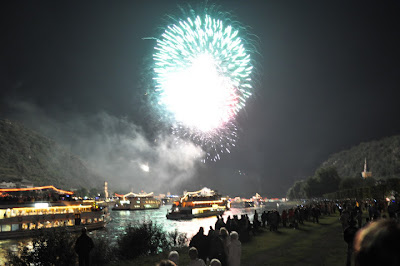 Finally, nightfall! By now, the river is lined with thousands of mostly local Germans, and the river is swelled to absolute capacity with colorful boats. Suddenly the sound of cannons echoes down the river. Red flares at the bases of the castles make them appear to be on fire. This isn't just a fireworks festival, it's a simulated medieval battle! 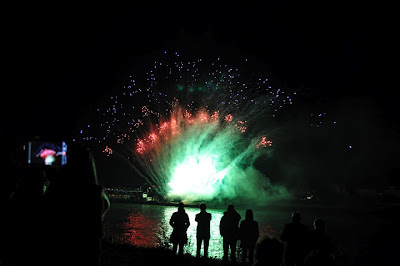 The castles take turns shooting off fireworks, as do the river barges. During the finale, all of the locations were shooting them off at once, and we were absolutely surrounded by fireworks.

This was a truly unique festival, and one to be remembered. Click on the link below to see the rest of our pictures!