There’s just so much to say about Rome! I’ll try to intermix our cultural experiences with the things we saw, so I don’t sound so much like a tour guide! 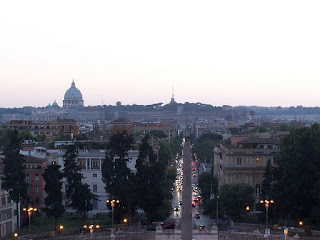 After we left the hotel in Frascati, we went to stay in a monastery near Vatican City which was run by Spanish nuns, who did not speak any English at all. We obviously had trouble communicating, and I later realized it wasn’t helping when I tried to interject the few Italian words we knew, because they were speaking Spanish the whole time! Our stay there was an interesting experience, though. The hotel was very simplistic, but clean. We had a curfew of 11pm, every night, and if you missed the curfew, you had to find somewhere else to stay that night…without your luggage. This ended up being fine with us because we were so exhausted at the end of every day, we were in bed before the curfew. We didn’t even have keys to the front door- we had to ring the bell, and then a nun would stick her head out a few floors up, say something in Spanish, and eventually make her way to the front door after 5 minutes or so. These are the type of funny memories that can be frustrating in the moment, but we will look back on fondly forever. 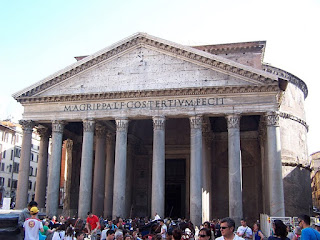 One of the most popular sights to see (second only to the Colosseum) is the Pantheon. The Pantheon is a religious temple which was built in the first century. When it was built, it was the largest unreinforced concrete dome in the world, and it still holds that record today, 2,000 years later. The dome has a large hole in the center called an “oculus”, which allows light and fresh air into the building. On the other hand, it also allows rain into the building, but there are drainage holes in the floor for that. The height of the dome and the width of the inner circle are exactly the same…a perfect sphere could fit in the space in the middle, which is pretty amazing for such an old building made of stone. Outside the Pantheon you can always find men dressed up as gladiators who you can take your picture with, and horse drawn chariots if you want a ride around the city. 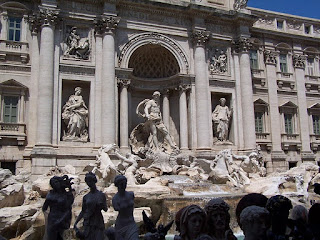 One of our favorite landmarks to stop and hang out at was the Trevi Fountain. It is huge, with giant statues sprawled out across it. This fountain actually marks the end of one of the ancient Roman aquaducts, and the scene that is depicted by the statues is when the pure water was discovered near the city. Today people throw coins in the fountain for good luck, and apparently the money that is collected goes to programs to help the poor in Rome. On a side note, we had some excellent lasagna at a restaurant next to this fountain!

Rome is not exactly set up to be easy for a tourist to navigate, which was a little surprising. In fact, we had so much trouble that I would swear they do it on purpose, to get you to wander around more and buy things. Maybe we are spoiled now by the excellent public transportation in Germany, but Rome could make a few improvements. For starters, you do NOT want to attempt to drive in Rome, and don’t even THINK about renting a scooter…you will not live to advise the next person against it. Traffic in Rome is scary and chaotic at best. There will be a 4 lane street with 6 lanes of traffic; cars, giant tour buses, and hundreds of scooters weaving in between the vehicles. People think red lights are suggestions, not rules, and pedestrians walk right out in front of cars. I repeat- do NOT try to drive here. We bought a “Roma Pass”, which is good for 3 days. It gets you unlimited travel on the buses and local trains, and entry into 3 museums or other tourist attractions that you have to pay for. We thought “buses will make it so easy to get around”…wrong! The signs at the bus stops tell you the stops the bus will make (they all sound alike), but have no maps, so those names mean nothing to you. Everywhere we went, we had to use 3 different maps to try to piece together where we needed to go. The good news: once you get into the center of town, most of the major sites are within walking distance. And when I say “walking distance”, I mean you will be very, very tired of walking by the time you leave Rome. 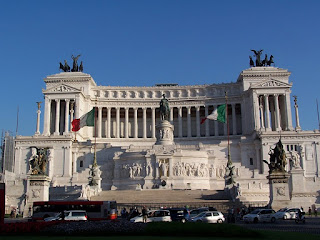 Nearby the Colosseum was one of the largest and newest buildings we saw- a giant palace built by Mussolini around the time of WWII. It is huge, and bright white. It almost looked like it might have fit in with the ancient Roman buildings when they were new. That would have been an amazing sight to see. On the back of this building is a very tall glass elevator which you can ride in and see the city from high up. 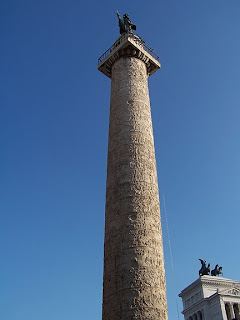 Next to Mussolini’s palace was a huge stone column with carvings over every inch of it. These carvings spiral around the column from bottom to top and illustrate the thousands of years of Roman history. 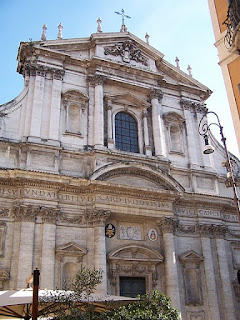 Rome (and what we’ve seen of Europe in general) is full of extravagant churches. The more churches you visit, the more they all tend to look pretty similar. We knew we would be amazed by Saint Peter’s Basilica (I’ll talk about that in part 4), but we were just as blown away by a little church we just happened upon as we wandered down an alleyway. It was called the Church of Saint Ignatius, or “Sant'Ignazio”, and it didn’t look like much from the outside, compared to other churches in Rome. This church was as impressive as the Sistine Chapel, seriously. The walls and ceilings are totally covered with giant frescoes which represent the different people of the world (they had a section for America), and the altar was completely amazing. Everything was huge and shining like gold, and there were giant carved statues everywhere. 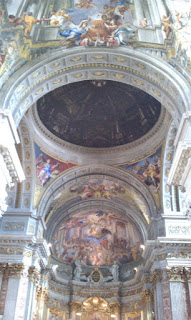 Billy was most amazed by the dome on the ceiling, which is actually an optical illusion. Once you get under it, you realize it is actually just painted on a flat ceiling! We later learned that this was because the neighbors didn’t want a dome obstructing their view. We would rate this church as much of a “must see” as the Colosseum. 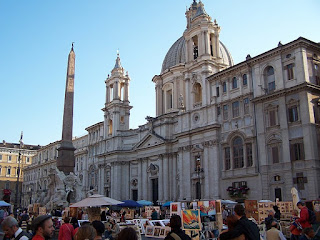 Rome is full of piazzas, which are basically public meeting places…open areas with fountains or statues where people just hang out. Our favorite was probably the Piazza Navona, which had a fountain in the center with statues that were just unbelievably huge. This piazza also seemed to be the local art center. Every day, it was full of artists selling their work. Most of it was surprisingly similar- small watercolor paintings of landmarks from around Rome. There were also a lot of street performers, like the people who dress up and stand like statues, and then “come to life” when you put money in their hat. You’ll never believe what the most common one I saw was…the Statue of Liberty! I don’t get it…why are Romans dressing up as a French statue in New York? Billy and I were saving our money for someone who would just paint themselves white and stand outside like one of the many naked statues you see all over Rome :)