My first experience in Vatican City was being shuffled out by Swiss guards with very large swords.

We were wandering around town, doing as the Romans do, and we passed this huge gate, which was wide open. Billy said “that’s an entrance into Vatican City”. Of course, I immediately jumped through the gate so someone could take a picture of me in two countries at once (Vatican City is a sovereign nation). Little did I know that not anyone can just walk through the ‘border’…but the armed guards were quick to inform me.
We walked around the corner into St. Peter’s Square, the large gathering area outside St. Peter’s Basilica. 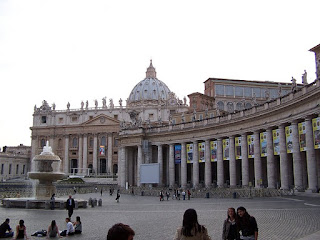 The walls surrounding the square are lined with statues of saints. It’s easy to overlook how giant these statues (and so many of the statues in Rome) are, because they are placed on such giant structures. Each of the saint statues in the semicircle in front of the basilica are easily 3-4 times life size, and there are so many of them. One thing that struck us over and over again during our visit is the amount of time it must have taken sculptors to make even one of the thousands of statues we saw. It must have been the life’s work of so many people during that time.
A few days later, we went back to actually see the inside of the basilica. Like all of the major attractions in Rome, you should plan when to go ahead of time because there WILL be insanely long lines. After waiting for a while to get into the basilica, we went through a set of guards who told me I could not enter because my skirt was too short! Apparently the dress code for the basilica requires that you cover your shoulders and knees. So, Billy had to run and get a scarf that I could wrap around my legs, and we were on our way. 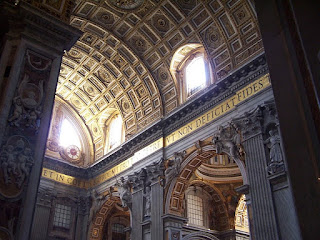 St. Peter’s has the largest interior of any Christian church in the world! It was absolutely huge, and every inch of it was ornately decorated. Every corner had giant statues and pieces of art. Famous Italian artists Michelangelo and Bernini have works of art on display here. 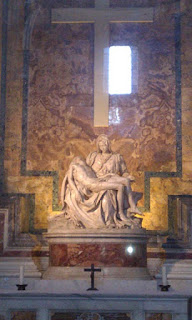 One of the most prized pieces of art in the basilica is Michelangelo’s “Pietá”, a statue of Mary holding Jesus after he was taken down from the cross. A friend told us that recently a man attacked this statue with a hammer and badly damaged it, but it has been restored. I’m not sure how he made it past all the metal detectors! It was like airport security coming into this place… 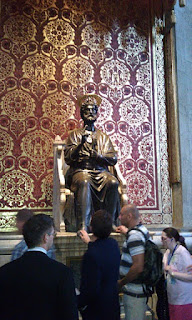 Another well known piece is a bronze statue of Saint Peter. People touch his toe for good luck. 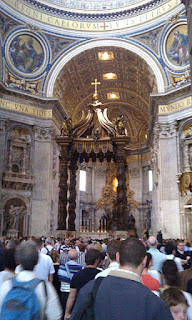 Toward the front of the church is a beautiful bronze altar that is 100 feet tall. Like the statues, it’s hard to appreciate the sheer size of it in the context of such a huge building. Below the altar is a staircase that descends into what is claimed to be Saint Peter’s tomb. Saint Peter was one of the 12 apostles, and Catholics hold him as the first pope of the Catholic church. We happened to visit the basilica just one weekend after the beatification of Pope John Paul II. The pope’s casket was being held inside the basilica, for followers to come and visit.

One of the highlights of visiting Vatican City was our climb to the top of St. Peter’s. The dome above the basilica’s altar is 450 feet tall (the tallest dome in the world), and you can climb almost all the way to the top! I think it cost us about 3€ each, but if you wanted to take the elevator, it costs more (and the elevator only took you so high…you still have to walk quite a bit). It was A LOT of stairs, and they were very, very narrow. I had to wonder what someone would do if they had an emergency and needed to get out. It just wasn’t possible…you had to keep going. Every once in a while there was a small window where we could see how high we were above the city. 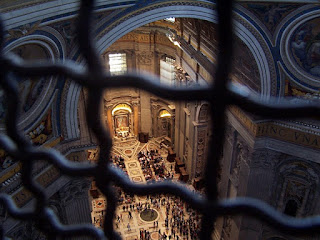 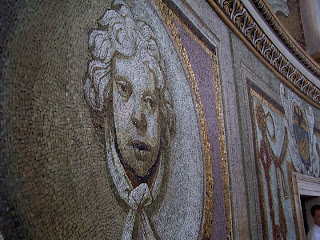 It was only from this ledge that were close enough to the ceiling to see that it was not painted; the beautiful ‘frescoes’ we saw from the ground were actually tile mosaics! It made how real they looked even more amazing. 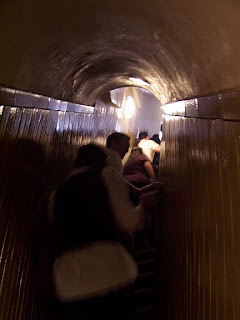 As we got further up into the dome, the staircase became slanted to fit the dome’s shape and you had to lean on the wall to keep climbing. 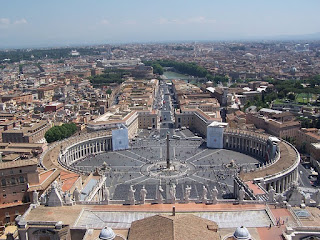 We climbed to a balcony that circles the dome. It was awesome…you could see the entire city! On the way back down, you can also go out onto the roof of the basilica. 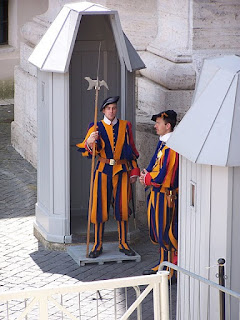 A piece of interesting history about Vatican City is the guards. They are from the Swiss army; not Roman. This dates back to the 16th Century. Swiss guards were brought in to protect the Pope because they have a strong reputation of bravery and loyalty. In the Sack of Rome in 1527, Vatican City was invaded by Roman troops with the intent to take over. While a small group of guards moved the Pope to safety through an underground tunnel, all of the rest of the guards (who were completely outnumbered) died fighting to hold back the Roman army long enough for the Pope to get away. They have used Swiss guards ever since. To become one, you must be a single, young male who is a Swiss citizen and is well educated, speaks multiple languages, and has had extensive martial arts and combat training.

Because Vatican City is a sovereign nation, it has its own laws. Those laws allow the Swiss guards some interesting authority. For example, if any of the guards feels that a person is a direct threat to the life of the Pope, that guard has the authority to decapitate the person on site! On a lighter note, the Swiss guards still wear the same uniforms they have worn since the 16th century, and I have to admit…they’re kinda silly looking.

As I suggested, we had planned out the days and times that we would visit the major landmarks of Rome, so we would beat the huge crowds. A lady at the bus station specifically told us that the Vatican museum is open on Sundays, but come Sunday, she was wrong. We were leaving the next day, and we thought we had missed our chance to see one of the things we had looked forward to the most…the Sistine Chapel. But, we decided to get up early and be at the museum when it opened Monday morning. There were still huge lines. We didn’t have much time to go through the museum, but we still got to see a lot. If we get a chance to go back, we will dedicate a day to really going through this museum. We thought the Sistine Chapel would be the only major attraction, but it is only the most famous; there are so many impressive things to see. Every wall, ceiling, floor, hallway…even the entrance to the bathrooms was covered in beautiful frescoes. We walked through long hallways lined with statues, and others covered in paintings, and you just couldn’t take enough pictures. The pictures don’t do it justice anyway. 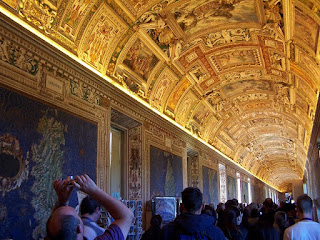 At the end of the museum is the Sistine Chapel, which was painted by Michelangelo between 1508 and 1512. He painted over 1,000 m² of ceiling! The most famous part of his painting is in the center of the ceiling, where God is reaching down and touching fingers to Adam, which represents the beginning of human life. Also famous is the front wall of the Chapel, which is completely covered with a painting which depicts the ‘Last Judgment”- the final battle that leads to the Apocalypse.
Michelangelo supposedly modeled the faces of some of the people in the paintings on people he knew. For example, Saint Bartholomew was a self portrait, and the face of Judas (the apostle who betrayed Jesus) was modeled after one of Michelangelo’s enemies. Unfortunately, taking pictures is not allowed in the Sistine Chapel.
Today, the Papal Conclave (the time when the Cardinals meet to elect a new Pope) is held in the Sistine Chapel. There is a chimney on the roof, and when a decision is made on a new Pope, white smoke comes out of the chimney, from the ballots being burned.