We went to Rome for one of Billy’s project meetings, and we came back exhausted! Because there is so much to say about Rome, I’ll split the stories into 4 parts: Frascati, ancient Roman ruins, Vatican City, and the rest of Rome. First, I’ll tell you about Frascati.

This is the city where we stayed for the first 2 nights. It is nestled on a big hill that looks down over Rome. Getting here was an adventure. We flew by plane from Duesseldorf to an airport outside of Rome, and then took 2 trains to Frascati, the last of which broke down 5 minutes from our destination. It was nearing midnight and we were stuck in complete darkness while the train “rebooted”. But, we were back on our way before too long. 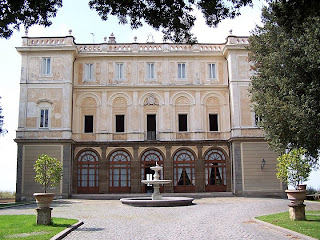 We stayed in a beautiful, very old hotel called Villa Grazioli. The main building of the hotel, where all of the meetings were held, had an interior that was completely covered in frescoes, art, old books, and really large furniture. This would be our experience in Roman buildings…it was as if the painters of the day looked at a white wall as a canvas. It was not “clean” looking; it was “empty” looking. 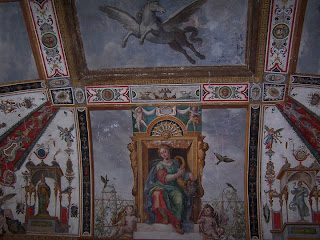 There was a shuttle that the hotel provided that would take us into Frascati, so we went there for lunch a couple times. It was a really interesting, very small town. If I wanted to work in Rome, I would definitely live in Frascati. Beautiful view, good food, everything was cheaper, and you do not have the crazy, crazy traffic! 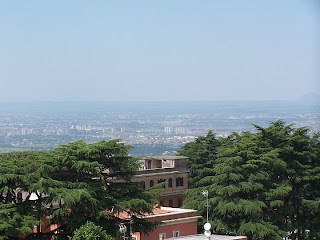 Much of the interesting history of Frascati is centered around plague. In the center of town, there is the façade of the Church of Saint Mary (only the front is still standing- there are apartments right behind it!). In 1656 some plaster on the inside of this church peeled away and revealed a fresco of two saints who were considered protectors from plague. That same year, a devastating plague swept through Rome, but Frascati was unaffected. Ever since, those two saints have been considered protectors of the city, and the façade of the church which still stands has a statue of the saints on either side of the false door. 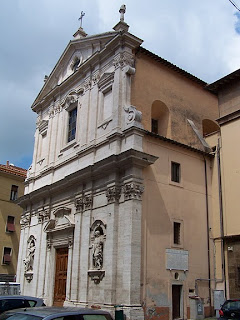 Almost 200 years later, another huge plague swept through Rome, and many people fled the city. Frascati was the only city who allowed the displaced Romans to seek shelter there, and since then the two cities have shared a flag and a close historical bond.

I would be crazy to write an entry about Frascati and not mention the gelato! It was much cheaper here than in Rome, and by far the best ice cream I’ve ever had. I don’t even know if I’m allowed to call it ice cream. My two giant scoops of stracciatella (chocolate chip) and pistachio were one of the highlights of my entire trip! The hotel we stayed at also had excellent food. Everything was traditionally Roman; oil and vinegar cheese and tomatoes, great pasta, and fresh bread with every meal.

Speaking of food, I gotta say…I fully expected my favorite foods in Rome to be pastas, but there was something better than that. I always loved Fig Newtons, but I had never had a fresh fig. Well, Rome has fresh figs, and homemade fig pastries. I think it may have been my favorite food EVER! If you ever go to Rome, see the major sites, get some pasta and gelato, but do NOT miss out on the fresh fig pastries! You should also try some of the local favorites which are odd in other places, like thinly sliced ham wrapped around melon balls.